Meeting the Press at the VIR Media Day

Virginia International Raceway hosted local media for an IMSA media day last Friday. They’re building up excitement for the Tudor United SportsCar weekend that’s coming August 22-23. Freedom Autosport’s Liam Dwyer and I were both on hand, as well as Mazda Motorsports PR director Jade Gurss. A lot of other series drivers were there, too, along with race cars on display.

We had a press conference with the local media to talk about our thoughts on the upcoming race and the continuing improvements that VIR is making to the circuit. It was exciting to be up there with such good company, and it was fun being at the track during the Ultimate Track Car Challenge event. The paddock was busy so there was a lot of great energy and activity, which gave the media an idea of what to expect for the IMSA event next month.

After the press conference, the media had the opportunity to get one-on-one interviews with drivers. They also got a chance to take a ride in some of the race cars, which gave them a feel for what it’s like to be at speed on VIR’s track.

The afternoon capped off with a pro/am go-kart challenge! Media members were paired with a pro driver, and although not all of the media had racing experience, having a pro driver on the team really mixed up the results. Everyone had a great time. 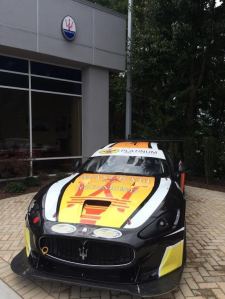 Personally, I’m looking forward to the event. VIR is my home track, and I grew up attending races there and competing at the club level. It’s even home to where I got my first win in the Continental Tire Series, with Freedom Autosport in 2009. It’s always an exciting event on the calendar, and although the Prototype class won’t be running that weekend, I’ll still be racing: Taggart Autosport is entering a Maserati in the Trofeo MC World Series event, and I’ll be co-driving with Jim Taggart. It’s a spec Maserati series that travels all around the world, and VIR is lucky enough to be hosting the series for the second year in a row. It will be an incredible event weekend for the fans, with over five series racing! The track will be busy until sunset every day.